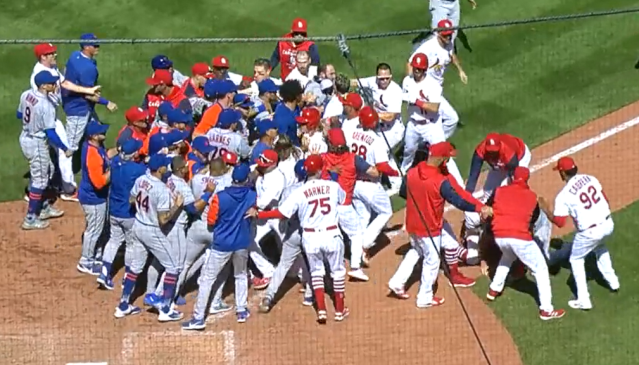 The benches cleared in the bottom of the eighth inning after Yoan Lopez appeared to have attempted to intentionally hit Nolan Arenado. Not only did he attempt to hit Arenado but he threw at his head. The lowest level move a pitcher and a team could make.

The Mets lead the MLB currently in hit by pitches with 19. In game two of the series between the two teams, Mets batters were hit thrice and once today as well. The hit by pitch came in the top of the eighth inning on a fastball by Genesis Cabrera that hit J.D. Davis in the foot.

New York for some reason feels the need to take offense to all of this and feel that every hit by pitch is a personal vendetta against them.

Well, here is a news flash for the Mets and their roster. The world doesn’t revolve around you.

All of this has started because of one man and his ability to get bent out of shape. Buck Showalter is the reason that his team acts in the ways they have. Apple doesn’t fall far from the tree in the big apple, because Showalter is the reason for this mess. Since the beginning of the season, Showalter has felt that his team has a target on their back, and every time they get hit, he feels the need to get to the top step of the dugout and start a fight that he can’t win.

Showalter did not help himself out with his comments after the game.

"I’ll let them handle their players. I know our player got hit in the head and went to first base."
pic.twitter.com/KrKmzeZ9eo

There is a big difference between intentionally throwing at someone’s head and losing control of an 83 mph breaking ball. Maybe I am looking through red-tinted glasses but the Cardinals seemed to never have any intention of hitting a Mets player. I cannot say the same for their team.

When things got heated in game two, Chris Bassitt even said that nothing was intentional and that the ball is very hard to throw.

“MLB has a very big problem with the baseballs. They’re bad. Everyone knows it. They don’t care. MLB doesn’t give a damn about it.”

If only Bassitt could relay this information to his manager and the rest of his team.

How is Lopez not ejected?

Arenado was ejected in the bottom of the eighth for pretty well insinuating a fight and for the benches to clear. The ejection of Arenado is not wrong and I agree with the call, but in no way shape, or form should Lopez have stayed in that game as well.

Looking at the clip from the reaction by his teammates and Lopez after the eighth inning, this is all you need to do.

There is absolutely no place for actions like this in the game of baseball. This video shows that it was done with intention and malice.

Don’t start a fight that you can’t finish

That is exactly what the Mets did today. Arenado took offense to the placement of the pitch. As he should.

Arenado is a veteran and a big boy. He knew it was coming and had no issue with being hit. What he didn’t appreciate, was the attempt by Lopez to throw at his head.

The Mets first baseman Pete Alonso had quite a lot to say after the game and about the situation late in the game.

“If I wanted to put someone in the hospital I easily could” pic.twitter.com/EwaULlR4Wa

Those are pretty big words from a guy who was wrapped up by a 49-year-old first base coach.

The two teams are set to meet again in New York in two weeks. Get your popcorn ready.

Brendan Donovan for NL Rookie of the Year?

At what point should we start talking about putting Brendan Donovan in the conversation for NL Rookie of the Year? Read below to see why Donovan should be considered for the award. […]

While production is very slow at the major league level, things are heating up in the minor league system of the St. Louis Cardinals. Read below to see what the Peoria Chiefs have in store for this next season. […]