The St. Louis Blues are back in action tonight with another road game against the Philadelphia Flyers. Read below to see our preview of the game and my bet of the day.

The St. Louis Blues continue their road trip, this time back in the United States in Philadelphia. This is the fourth and final road game of this trip, before a one-game stop at home on Friday against the Buffalo Sabres.

The Blues are currently 2-0-1 on the road trip, with an overtime loss to Montreal. The Blues rebounded the tough loss with a good win over the Toronto Maple Leafs, 6-3. St. Louis is 3-2 in their last five games. 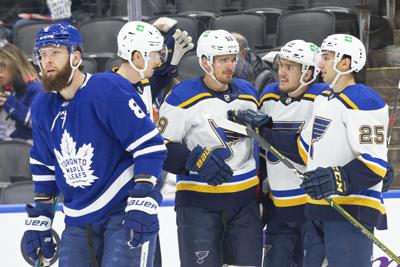 The Blues are looking to continue their climb in the standings of the Central Division, along with the Western Conference.

Saturday’s performance was much needed after the very disappointing loss to Montreal on Thursday night. That is a loss that never should have happened. Taking the lead with 1:12 left in the third period, then losing in overtime is unacceptable.

Picking up a win against a good Toronto team was a great rebound, but the Blues have to shift their focus again to a below-average team. Besides Marco Scandella, the Blues will be healthy as Vladimir Tarasenko is likely to play tonight after having shoulder issues.

This is the first time since 2019 that the Blues have played in Philadelphia. Jordan Binnington made his first NHL start here and was the beginning of the Stanley Cup run by St. Louis. The night before the game in 2019 was when Gloria was played in a bar and led to the rebirth of the great song.

Currently sitting in second to last in the Metropolitan Division, the Philadelphia Flyers are struggling this season. The Flyers have lost 18 of their last 20 games. Needless to say, it has been a season to forget for the Flyers.

Former St. Louis Blues head coach Mike Yeo is the current interim head coach for the Flyers. Philadelphia fired Alain Vigneault in December and named Yeo to take over. Things have not been better and it would not be surprising to see the Flyers clean house after this season.

The Flyers currently have five players out due to an injury in some shape or form. Claude Giroux leads the Flyers in points and assists with 38 and 22 respectively. Between the two goalies of Carter Hart and Martin Jones, Philadelphia has not found much success.

Robert Thomas continues to produce this season. Thomas has 39 points on the season (7 goals, 32 assists). He has seven points in his last four games, including two assists on Saturday night.

Bet this prop on DraftKings Sportsbook.

Hofer Leads The Blues To Victory

Joel Hofer leads the Blues to a win in his first-ever NHL start on Thursday night. Check out our recap below as the Blues move to 7-1-1 on the season. […]