Miles Mikolas neared a no-hitter on Tuesday night against the Pittsburgh Pirates. Read below to look back on his outstanding performance and the series win over the Pirates. 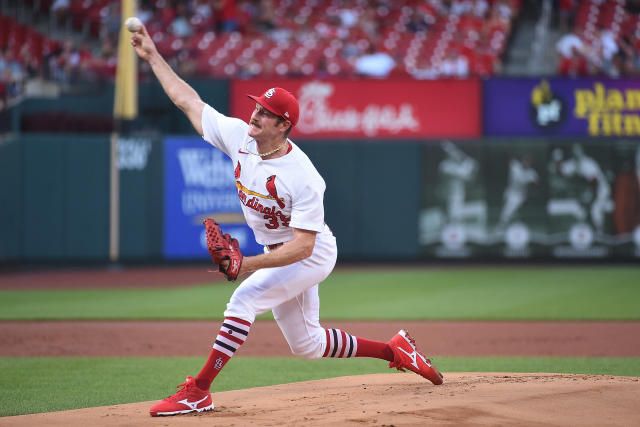 The Cardinals won the game 9-1 with the lone run coming from a groundout by Daniel Vogelbach that scored Bryan Reynolds. Reynolds reached base on a fielding error by Juan Yepez in left field and ended up on second base.

Until Tuesday night, the season-high in pitches for Mikolas was 115. He ended the eighth inning with 115 pitches. There was no debate between manager Oli Marmol and Mikolas, this was his game to finish.

St. Louis has not had a no-hitter since Bud Smith threw one in September of 2001. At that point, I was four months old. It has been a long time since this franchise has seen a no-hitter and near no-hitter.

Only six teams have gone longer without a no-hitter, the longest team being the Cleveland Guardians (1981).

Michael Perez grounded out to Brendan Donovan to start the top of the ninth. The fans started to rise to their feet, hoping the impossible could be possible. Tucapita Marcano flew out to right for the second out of the inning and one away from a no-hitter.

With two outs, Cal Mitchell pinch-hit in the inning with history on the line. Mikolas fell behind in the count but eventually even the count at 2-2. One strike away, the next pitch from Mikolas was hit deep into center with Bader going back and the ball fell and bounced over the wall for a ground-rule double.

Miles Mikolas loses a no hitter with two strikes in the 9th inning pic.twitter.com/GuPSZSAt8v

The chance at history was over and so was the night for Mikolas. On the night, Mikolas threw 129 total pitches with six strikeouts and one walk, allowing one hit.

St. Louis has come very close throughout the years at a no-hitter, with Michael Wacha having two of the three chances. Wacha was one out away in 2013 against the Washington Nationals when he lost his no-hitter. He was very close in 2018 when he pitched for St. Louis against the Pittsburgh Pirates as well, taking a no-hitter into the ninth inning before losing it.

St. Louis will see Wacha pitch on Friday in the first game of their series with the Boston Red Sox.

It was a very good homestand for the St. Louis Cardinals, winning five of the seven games and taking three of four in the Pittsburgh series. The Cardinals took the first three games and battled back in game four but eventually fell short after a go-ahead two-run home run by Bryan Reynolds. It was a rough first start back for Jack Flaherty but Marmol was happy with what he saw from his pitcher.

Marmol on Flaherty's season debut: "I thought he actually did well for first time out in controlling his nerves. He commanded his fastball, a lot of fastballs for strikes, some groundball outs, left a couple sliders up and got hurt. Overall, still positive."#STLCards pic.twitter.com/I6VJjR88c4

Paul Goldschmidt continues to tear the cover off the ball, especially in this series with the Pirates. He finished the series 10-16 at the plate with two doubles and four home runs. He should most definitely be the top candidate for NL MVP.

A look at the Central standings

With the loss and the Milwaukee win, the Cardinals hold a 1.5-game lead on the Brewers in the NL Central standings. Milwaukee wraps up a big series with the New York Mets tonight, while St. Louis has the day off as they head to Boston for a three-game road series.

The two teams will meet for a very important series in Milwaukee starting next Monday. It will be four games, Monday thru Thursday and that very well could dictate a lot of what happens in the standings. Corbin Burnes and Miles Mikolas are set to start off the series on the mound for their respective teams.

Nolan Arenado gets to have some fun against his previous team as the St. Louis Cardinals are set to host the Colorado Rockies for a three game series. […]