The St. Louis Cardinals earn a series sweep over the Chicago Cubs after a pair of wins on Thursday. Read below for a recap of the two games on Thursday. 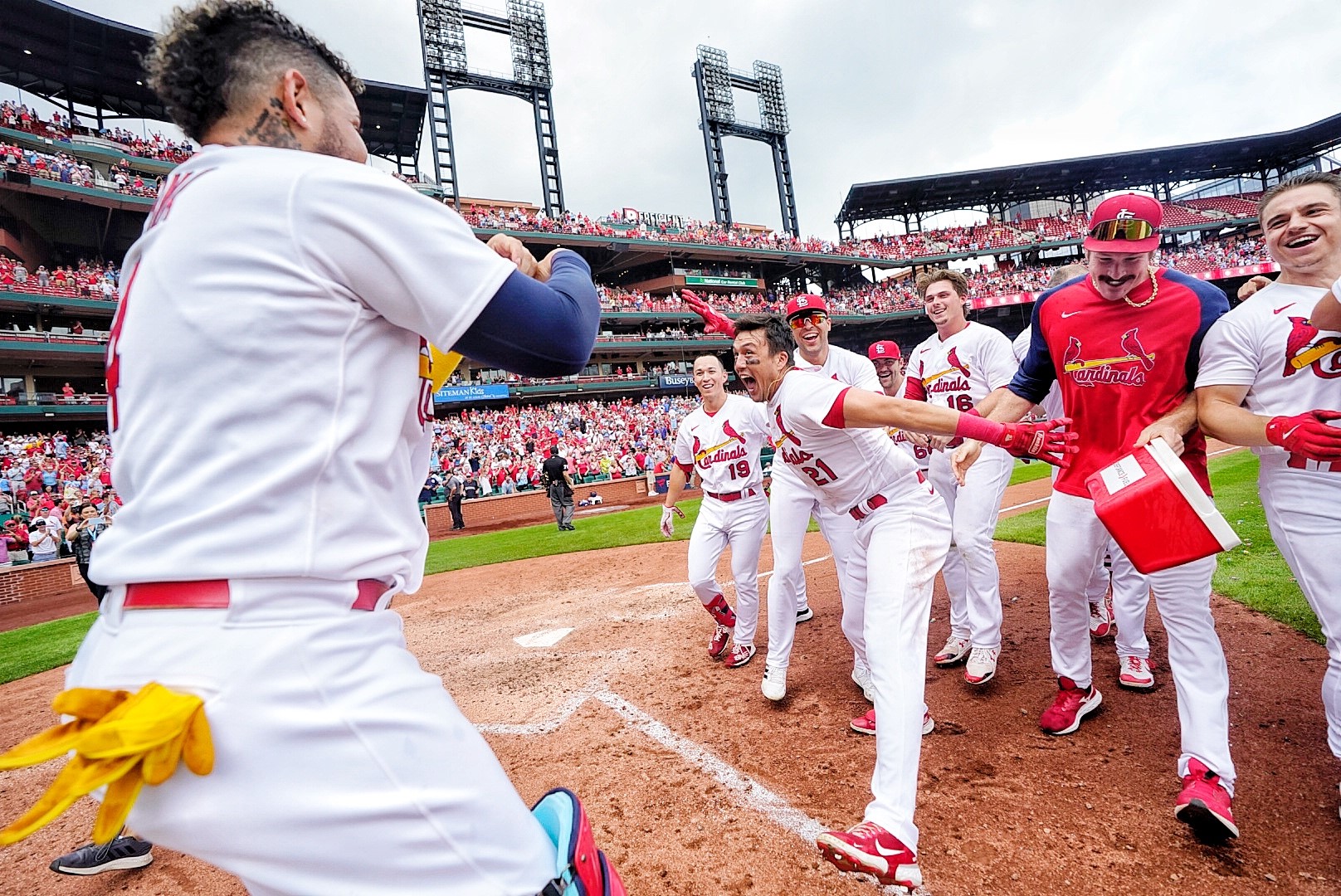 After a victory on Tuesday night in the opening game of the three-game set against the Chicago Cubs and a rainout on Wednesday night, the St. Louis Cardinals sweep the Thursday doubleheader to take the series. Two seventh-inning comebacks propelled St. Louis to a pair of victories to the demise of the Chicago bullpen.

The two wins help St. Louis pull into a tie for first place in the NL Central Division with the Milwaukee Brewers. The ‘Brew Crew’ suffered a series sweep at the hands of the Pittsburgh Pirates which included two brutal finishes on Wednesday and Thursday.

After a long delay on Wednesday night, the rescheduled game was played at 12:15 p.m. Thursday afternoon with Miles Mikolas on the mound. Much like his last start at Busch Stadium, Mikolas coughed up a first-inning home run to Willson Contreras.

The tide turned for the Cardinals in the seventh inning after Nolan Gorman and Paul Goldschmidt started off the inning with back-to-back home runs. Gorman just missed a home run in his previous at-bat when he flew out to the wall after an incredible catch from Rafael Ortega. He would not be denied this time when he went opposite field on the first pitch of the at-bat, delivering a ball into the Cubs bullpen.

After the pair of home runs, you would have thought that Cubs manager, David Ross, would come to relieve Stroman but that was not the case. Nolan Arenado promptly doubled to left field and was brought in after a pair of fly balls by Paul DeJong and Lars Nootbaar.

The game would be tied at three heading to the bottom of the ninth with the meat of the order due up for St. Louis. After a Goldschmidt ground out to start the inning, Arenado and DeJong walked to bring up Nootbaar who had just tied the game in his previous at-bat. The newly appointed right-fielder, due to the Harrison Bader trade, came up clutch again with a single that scored Arenado from second.

It was a victorious walk-off that moved St. Louis half a game behind Milwaukee with one more to play on the day.

Game two started much like game one with Chicago jumping out ahead early after a first-inning home run. Patrick Wisdom gave Chicago the lead this time around with his twentieth blast of the season. Jose Quintana, making his first start for St. Louis, after being acquired at the deadline, was able to settle down after the first-inning mistake.

The Cardinals offense responded with two runs of their own in the bottom half with a long home run by Arenado.

Quintana would go on to dominate his former team after the early mistake, striking out seven and not allowing another hit for the rest of his performance. Quintana was pulled after the sixth inning, throwing 86 pitches on the night. It was a successful first outing for Quintana and his new team.

There was no offense after the first inning until the seventh inning, yet again. The Cubs tied the game in the seventh inning after a pair of walks and a hit off St. Louis pitcher Jordan Hicks. Hicks was able to force Frank Schwindel into a double play after a brilliant play on behalf of Arenado.

Much like game one, the Cardinals rallied in the seventh inning again, this time with a three-run blast by Tyler O’Neill. It was a big moment in the game, as Dan McLaughlin called it. St. Louis would tack on two more runs in the bottom of the eighth to push their lead to 7-2, resulting in the final score.

Looking for a big moment?

The Cardinals are now tied atop the central division standings in large part due to the comebacks by the Pittsburgh Pirates on Wednesday night and Thursday afternoon. The Brewers made the shocking move of trading Josh Hader at the deadline to the San Diego Padres. The organization has high hopes and confidence in Devin Williams to be the new closer.

Bryan Reynolds walks it off for the Pirates!

As any new closer would, Williams gave up the solo-shot, walk-off, home run to Bryan Reynolds on Wednesday night. After Pittsburgh gave up the lead in the top of the tenth to Milwaukee on Thursday, the Buccos walked the Brewers off again, this time on a wild pitch from newly acquired closer Matt Bush.

It will be quite the downfall for Milwaukee if they continue to blow games and leads as they did in the series against Pittsburgh.

The New York Yankees come to town starting tomorrow for a three-game weekend set. The anticipated return of Matt Carpenter and new Yankee Harrison Bader is expected. Bader will not play as he is still dealing with plantar fasciitis symptoms.

The Yankees own the best record in the American League with a record of 70-36.

Well, National League Central fans, we have passed the All-Star break, and the NL Central division looks about as mediocre as it has ever looked. […]

A historical night at Busch Stadium

It was a historical night at Busch Stadium on Wednesday night. Read below for a recap of the game and the legendary careers of Adam Wainwright and Yadier Molina. […]