After three days off, the Blues are back in action tonight against the Dallas Stars. Check out our Blues vs Stars Preview 12/17/21.

The last few weeks have been less than ideal for the St. Louis Blues, but they have made the most of it. The Blues finally skated with a full roster on Tuesday night in Dallas. It has required multiple rookie debuts, new faces, but they are finally back to a full roster. 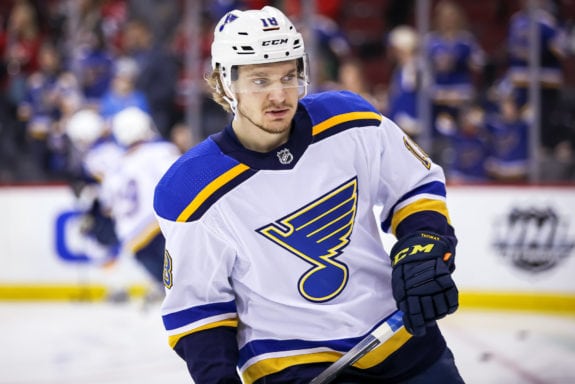 This will be the second game of a home-and-home between the Stars and the Blues. St. Louis won the first game on Tuesday night in Dallas. The Blues won the game 4-1, scoring four unanswered goals.

It was a complete performance by the Blues in Dallas, even when missing key players of this team. No one has been bigger for the Blues recently than Charlie Lindgren. Lindgren is 4-0-0 in four starts this season since being called up after Jordan Binnington was placed on the COVID list, and Ville Husso got hurt. Lindgren made 33 saves in the win on Tuesday night.

The beat-down Blues do not provide all negative news, but they do receive good news with Jordan Binnington being elevated back to the roster. Binnington will more than likely not start on Friday since he has been out for over a week now. All signs are pointing towards another Lindgren start.

Currently sitting sixth in the Central Division standings, the Stars are currently on a four-game losing streak. Before the current skid, the Stars had a seven-game winning streak. In the midst of all these streaks, the Stars had to announce the recent retirement of St. Louis native, Ben Bishop. Bishop had a great career and one of his most memorable games came in the Game 7 loss to the Blues in the 2019 Stanley Cup Playoffs.

The former Shark, Joe Pavelski, leads the Stars in goals this season and is tied for the lead in points. The issue for the Stars is that they do not have many playmakers. Jason Robertson has 21 points as well but after that, it drops off the Stars. The inconsistent goaltending has not helped the Stars either in their season of runs.