It is another home game for St. Louis tonight, as the Blues look to end their three-game skid. Check out our Blues vs Sharks 11/18/21 Preview.

The Blues are struggling right now, to say the least. Entering tonight’s game, the Blues have lost their last three games and six of their last eight. They have struggled to score at the regular 5-on-5 play, and are still taking too many penalties for my liking. The Blues look to be at full strength tonight and another day provides another opportunity to snap this losing streak.

These two teams have met once already this year in San Jose on the Blues road trip out west. The Blues won the first meeting 5-3, on the night of the newcomers.

The return of Brayden Schenn looks to be coming soon. Schenn was on the ice this morning at the team optional skate. He will not play tonight, as he was not in the projected lineup for tonight, but it is a good sign that we are continually seeing Schenn skate. Schenn is a big part of this team and this offense, a key player that the Blues are missing right now.

After losing two heartbreakers in a row, St. Louis is due for a win tonight. The Blues trailed the Oilers 4-2, came back to tie the game in the third period but ultimately lost on a goal scored with 28 seconds left, on Sunday.

Then Tuesday night, in a back-and-forth game with the Arizona Coyotes, the Blues would tie the game at two in the second period on a goal from Torey Krug. In the third period, the Blues were dominated by the Coyotes and Arizona scored the lone goal to win 3-2.

Craig Berube has shaken up the lineup for tonight, creating different defensive matchups and new forward lines. The number one change that stands out to me is the first defensive line, moving Parayko and Krug together. These two are by far the best defenseman on the team, and moving a defenseman who can handle the puck, with one of the biggest defenders in the game will be a good change.

For the forwards, the new line of Saad, Sundqvist, and Barbashev will be a gritty line. Coach Berube likes the possibilities this line could bring to the table for the Blues.

“I wanted to put an identity line together and to me (Saad-Sundqvist-Barbashev) is an identity line. It’s a line that’s going to do the right things, forecheck hard, play hard, be physical, hard on the other team, play against anybody,” Berube said.

The Sharks come into tonight’s game at 8-6-1, coming off a win Tuesday against Minnesota. Tomas Hertl, the Sharks leading goal scorer, notched another one in the score column en route to a 4-1 win against the Wild.

This will be the fifth and final game of the Sharks road trip, they are currently at .500 with two wins and two losses. 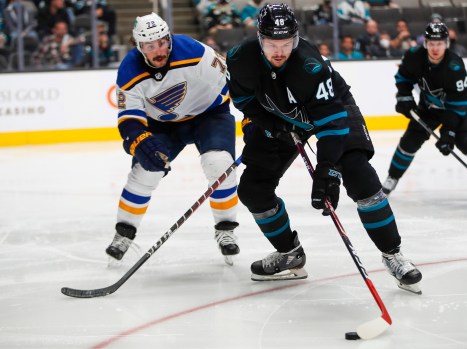 San Jose has split games this season in net between Adin Hill and James Reimer, both with eight games played. Hill has a record of 4-4, while Reimer carries a record of 4-2-1. Hill started in net when the two teams played in San Jose earlier this season.

Today’s player to watch is Jordan Kyrou. Kryou is on a hot streak to start the season, leading the Blues in points and goals. Kyrou scored in Tuesday night’s loss, to move his point total to 17. Kyrou is paired on the first line with David Perron and Ryan O’Reilly, the star-studded line as the Blues call it. O’Reilly had two assists in the loss on Tuesday.

Game four is a must-win game