The St. Louis Blues had no problem lighting the lamp on Monday night scoring seven goals en route to their win over the Arizona Coyotes. It was a contribution by the committee last night for the Blues, scoring five goals in the second period. Those five goals were scored in a span of 5:05.

The Blues trailed the Coyotes 2-1 at 3:58 in the second period. Justin Faulk would tie the game at 11:10 and the onslaught was on from there. Jordan Kyrou scored his first of the year a minute and thirty-six seconds later.

Klim Kostin introduced himself very well to the team last night scoring two goals. Coach Craig Berube moved Kostin into the lineup after the Colorado game. Berube sees a future in Kostin and wants to get him reps and game time, proving to be worthy on Monday night. Kostin scored two goals in less than two minutes, helping the Blues to a 5-2 lead.

Jordan Kyrou got on the board again, with an early candidate for goal of the year when he danced around the Coyote defense to score on a back-handed shot. The late blitzkrieg from the Blues sent them into the intermission with a 6-2 lead.

The Coyotes would respond with two goals of their own in the third period and put the pressure on the Blues, but eventually, Ivan Barbashev would add insurance with a goal at 12:25. From there the three-goal lead would be enough for a 7-4 Blues victory. 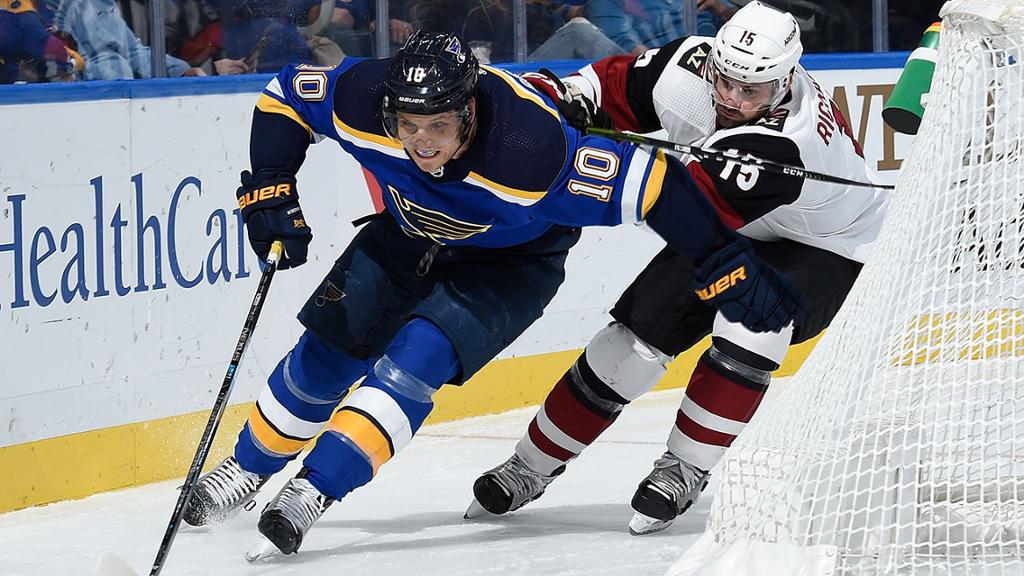 Stressing Early In The Season

The one issue that remains with the Blues in my eyes, and it has been this way for the last few seasons, the Blues often play to the score of the game. We have seen it twice already this year in two games, that the Blues have done a great job of forcing pressure, which allows them to build these large leads. The issue then becomes of the Blues starting to slack off and play to the score. When the Blues were up 4-1 against Colorado, you could see the Blues were trying to coast it in for the night, and against a very good team in Colorado, you cannot do that.

The same issue happened last night with a 6-2 lead in the third. The Blues came out flat and allowed the Coyotes to make things interesting. Now they still held a two-goal lead, but there was still a ton of time left to play and Coach Berube was not happy with his team.

After the Coyotes pulled within two, the nerves started to settle in a bit. Berube let a few expletives fly, that was caught on the television camera, to try and get his team motivated. Berube is known for his expletive and provocative moments, which I think is good for a tough coach like Berube.

We see game after game, with a lead that the Blues for some reason cannot clear the zone which ends up hurting the team. Multiple times against Colorado and last night, the Blues failed to do a simple thing and clear the zone. If these issues continue, they eventually will turn around to burn the Blues.

Hot Start On The Road

With all frustration aside, this team so far is 2-0-0 on the road to start the year, and if they manage to get a third win Wednesday night against Vegas, that would be the dream scenario for the Blues to start the season.

Not only beating a division rival but taking down two of the top teams in the Western Conference may turn some heads early in the season. The Blues have a chance to tell the rest of the league,

The Blues take on former captain of the Blues, Alex Pietrangelo, and the Vegas Golden Knights Wednesday. The puck drops at 9 p.m. CT.

The offseason is always a fun time for hockey fans as their favorite team begins to formulate a plan. For the St. Louis Blues their season ended on April 7th and that is a full […]