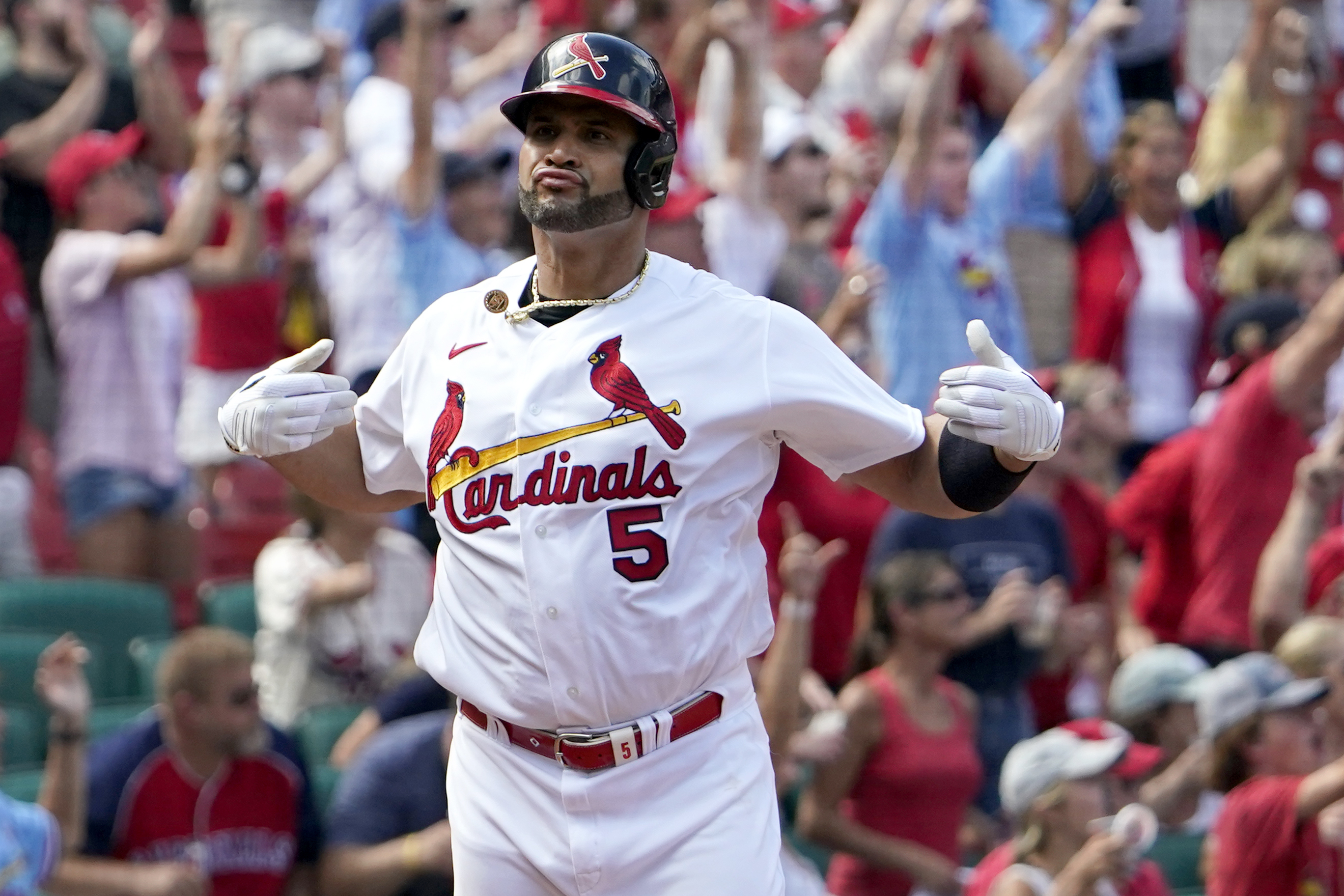 He is not just here to sell more tickets or for a feel-good send-off, Albert Pujols is here to play baseball and crush baseballs. His 63rd multi-home run game on Sunday helped St. Louis to a win over the Milwaukee Brewers and stay in first place with a series win. The Cardinals are 1.5 games ahead of Milwaukee after the thrilling win on Sunday.

After coming off one of the worst outings in his career, Miles Mikolas was primed for a big start today against the Brewers. With first place on the line, it was the Brewers that struck first with a two-run home run from Hunter Renfroe in the second inning. The Cardinals responded with a run of their own in the bottom of the second with Pujols launching his first home run of the day, off the McDonald’s fries in Big Mac Land, the 688th of his career.

There goes that man! pic.twitter.com/EH1xasKWgD

From there, it was another pitcher’s duel for four innings until Tyler O’Neill tied the game in the sixth inning with a solo home run, breaking his 1-17 streak. That would be the end of the day for Aaron Ashby after surprisingly being pulled from the game with only 79 pitches after six innings.

Mikolas capped off a big day with eight innings pitched, allowing four hits and two runs. Mikolas struck out six Milwaukee batters and left the game tied at two, heading to the bottom of the eighth. The Brewers trotted out their new reliever they received in the Josh Hader deal, Trevor Rogers.

Dylan Carlson put St. Louis on top with a solo shot, the third of the day for St. Louis. The Redbirds were not done yet and after a single from O’Neill and a walk from Goldschmidt, the table was set for Nolan Arenado. The third baseman, unfortunately, struck out, leaving two men on for Pujols.

Craig Counsell, manager of the Milwaukee Brewers made two big mistakes on Sunday. He pulled Ashby too early and did not pull Rogers soon enough and he would pay for it. With two outs and two men on, Pujols cranked the first pitch from Rogers into the left field power alley and over the fence for a three-run home run to put St. Louis up 6-2.

Albert just hit his longest home run of the season!

Home run number 689 proved to be worthy as Ryan Helsey gave up a solo shot to Rowdy Tellez with two outs in the ninth inning. That was the only run Milwaukee could manage and St. Louis closed it down for a 6-3 victory and a first-place cushion.

Pujols is seven home runs away from tying Alex Rodriguez for the most home runs in MLB history. If he manages to hit 11 more this season, Pujols would become the fourth player in MLB history to hit 700 or more home runs.

Milwaukee lost their chance of truly having a chance

The Brewers clearly do not care about winning the division and it has shown since the trade deadline. Why in the world would Milwaukee trade one of the best relievers in baseball when they are trying to win a World Series? The Brewers truly needed offensive upgrades and they failed to get that at the deadline.

After trading Hader, there have been some questionable decisions made by Counsell and that was apparent on Sunday in the loss to St. Louis. After just 79 pitches through six innings from his starter, Counsell decided to turn the game over to the bullpen. That backfired in the eighth inning when Rogers allowed St. Louis to take the lead and put the nail in the coffin.

There have been many questionable decisions made all around by the Brewers organization which will come back to haunt them this season. At this point, they’re better off heading home to play the Big Bass Bonanza slot.

What’s ahead for St. Louis?

The homestand continues this week when the Colorado Rockies come to town for a three-game set. The Cardinals just lost a series in Colorado but hope to take the series this time around and extend their lead in the division.

The Brewers head back home to host the Los Angeles Dodgers. This would be a great time for the Cardinals to strike and extend their lead.

Consistency is the inconsistency

The St. Louis Cardinals head back home after a split with the Milwaukee Brewers in a four-game series. Read below to see why the consistency is the inconsistency with St. Louis. […]